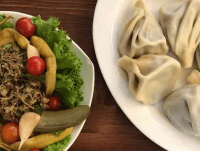 From khinkali to churchkhela: a guide to Georgian food

With a combination of rugged mountains and majestic lakes, vast stretches of grapevine-studded flatland, verdant soil, sweeping hills and a culturally rich capital city, there is something altogether enchanting about the country of Georgia. As well as bearing the hallmarks of a tumultuous and oft-invaded history, Georgian cooking also reflects its location. Frequently described as the point at which Europe and Asia meet, Georgia is flanked by the Black Sea, and borders Turkey, Russia, Azerbaijan and Armenia. The climate, meanwhile, is, for the most part, temperate and Mediterranean, resulting in exceptional fresh produce. These elements combine to produce a cuisine that is as wonderfully unique as the country’s landscape.