“Every Georgian dish is a poem.”
Alexander Pushkin

Traditions that warm the heart and fill the soul

The foods and flavors of Georgia reflect the country’s geographic setting—what food writer Darra Goldstein calls a “Shangri-la of bounty, tucked away in mountain valleys and fertile lowlands.”

Despite its seemingly remote location, Georgia once occupied a much more well-known place in the world. For centuries, it served as a stop on East–West trade routes. As traders passed through, the Georgians borrowed and assimilated the flavors and aromas of visitors’ culinary traditions. Centuries of foreign invaders also left their mark on the local cuisine. Georgian dishes now incorporate flavors and influences from the foods of Iran, Asia, Turkey, and the Mediterranean. And over time, each Georgian region has developed its own distinctive contributions to the country’s culinary identity.

Traditional Georgian cuisine combines fresh meats, fresh vegetables, herbs, and spices into distinctly flavorful dishes that are considered among the healthiest in the world. Whether prepared for a celebratory supra or for an everyday meal, Georgian cuisine always finds its most authentic expression at home, among friends. 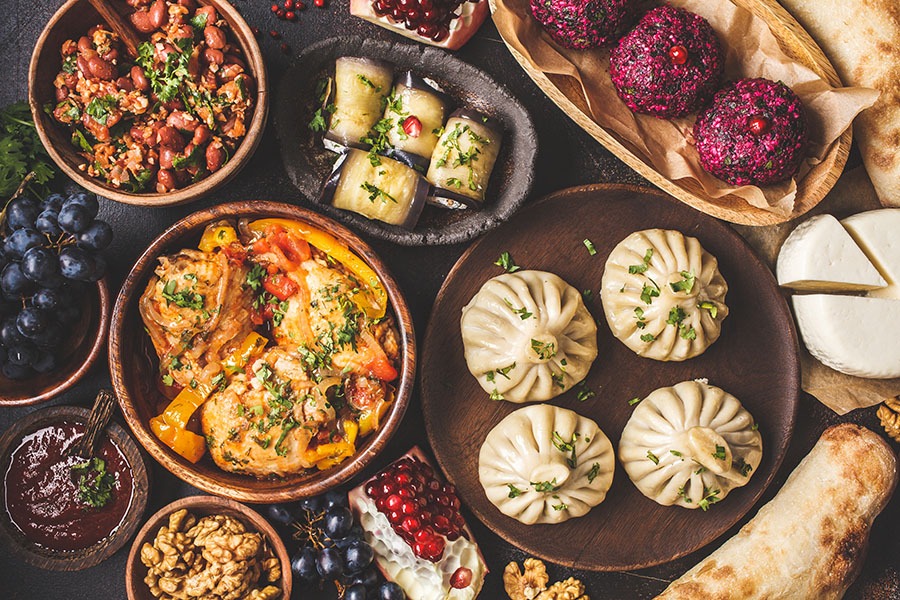 Supra: More than a feast

The supra is a traditional, often extravagant, Georgian meal that occupies the center of Georgian social life. Far more than a celebratory feast, it’s a tradition for the ages, a religious rite, and a national identity all in one. For all of life’s celebrations—births and birthdays, homecomings and anniversaries, weddings and funerals—there’s a supra.

The supra gets its name from the Georgian word for tablecloth—the space the feast’s dishes will cover. During a supra, food and wine are seemingly endless, and the plates pile up several deep to ensure that the table is full.

Though parts of the meal will vary from family to family and some elements differ depending on the occasion for a particular feast, many supra traditions are universal. Those rituals have formed a shared Georgian community, identity, and spirituality over generations.

Perhaps the most essential ritual is the presence of a tamada, or toastmaster, who leads the toasts around which the supra feast revolves.

A skilled tamada effectively evokes the spirit of shared community and culture, which for many Georgians has deep associations with wine. The tamada begins every supra with a trio of toasts—first to the motherland, then to God, then those in the room considered closest to divine: the guests. Georgian culture values hospitality above all, with guests seen as heaven-sent gifts deserving great honor.

As the feast unfolds, so do the toasts. Each round begins with a toast by the tamada, who empties his glass. Guests follow suit, often answering with toasts of their own in keeping with the theme of the round. Meanwhile, courses of food appear, each more substantial than the one before—herb salads, bread with spreads, khachapuri (cheese bread), roasted meats, vegetables, sweets—until the table is piled high with plates.

More than simply a feast, the supra fosters deep connections among those who break bread together. It cultivates an intimacy that knits them to one another and to the generations who have feasted and toasted and celebrated before them. 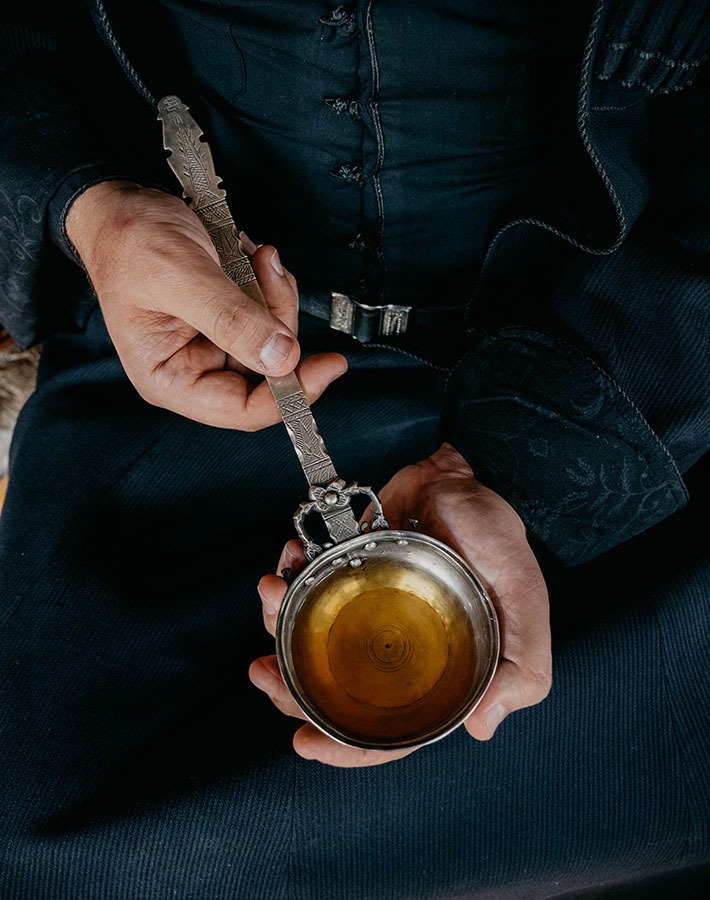 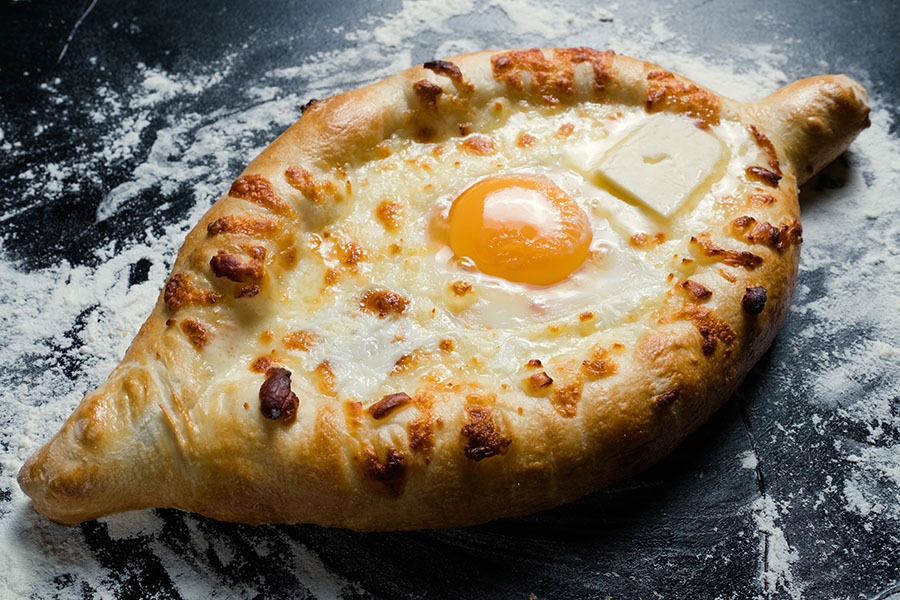 A bread in a category all its own, khachapuri inspires near-addiction in visitors who try it. Piping hot, oozing with cheese and butter, and made with love, khachapuri is an indulgence that isn’t soon forgotten. It’s Georgia’s national dish, more popular than pizza.

The recipe is simple: Leavened dough is left to rise; then it’s shaped, filled with cheese, and baked until blistered and bubbling. To eat it, tear off a piece crust and dip it in the warm, cheesy center.

Khachapuri’s simple recipe leaves plenty of room for interpretation—there are nearly as many variations as there are regions in Georgia. The two most common styles are a round version from Imereti and an elongated, boat-shaped version from Adjara, which is topped with a raw egg and extra butter when it’s hot from the over.

Khachapuri is available practically everywhere in Georgia—restaurants, specialty shops, open-air markets, and even the Tbilisi airport. As this decadent treat gains popularity around the world, it’s becoming easier for North Americans to find at home.

A close rival to khachapuri for the title of Georgia’s national dish is khinkali. These traditional dumplings are made of dough wrapped around a savory meat filling. Khinkali likely originated in Georgia’s mountain regions, though many parts of the country now claim their own versions.

The most common filling is a juicy mixture of beef and pork. Tbilisi’s dumpling houses add cilantro, chili, and onion to the mix. Other khinkali fillings include lamb, cheese, mushroom, and mashed potato.

Finger food in the truest sense of the word, khinkali are traditionally eaten without utensils. Although eating khinkali can be a messy affair, it is a culinary experience that is distinctly Georgian and an essential part of the country’s food culture. 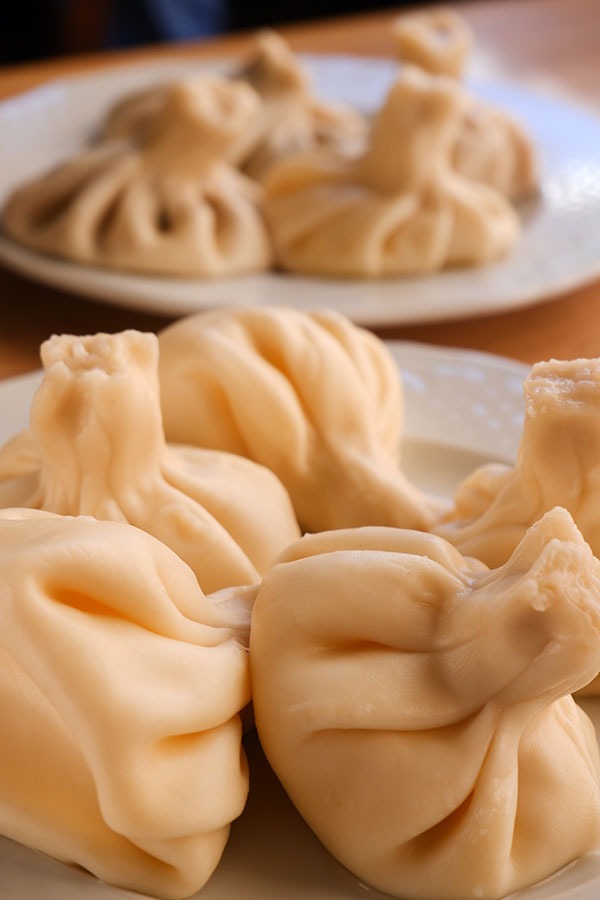 Elements of a traditional Georgian meal 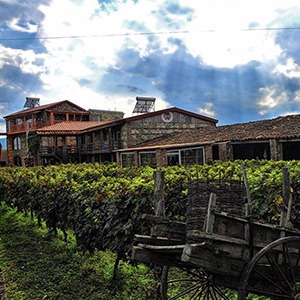 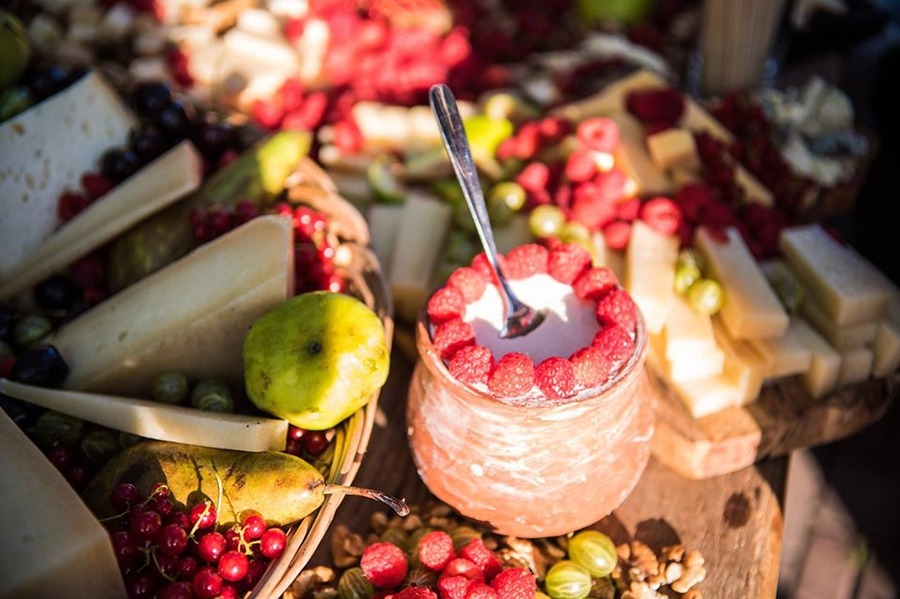 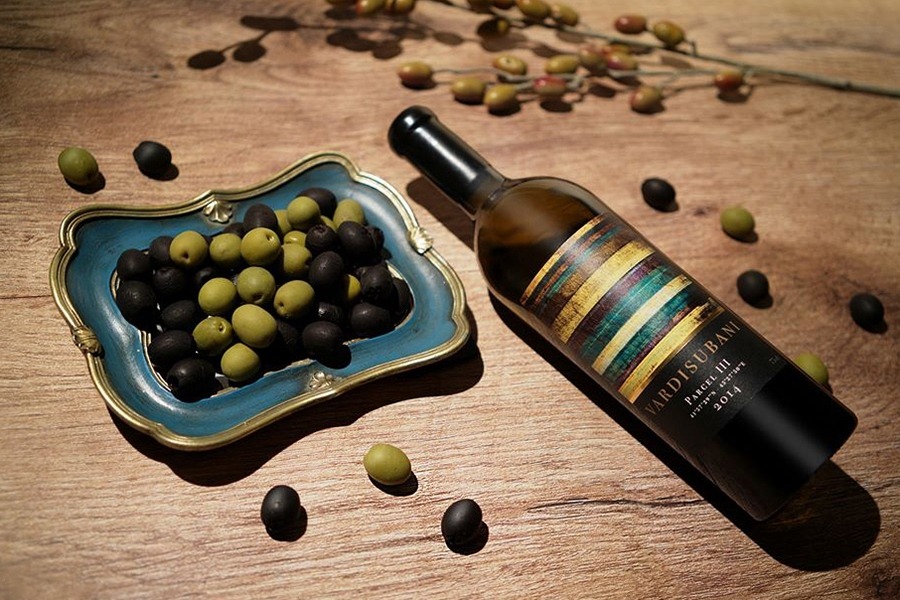 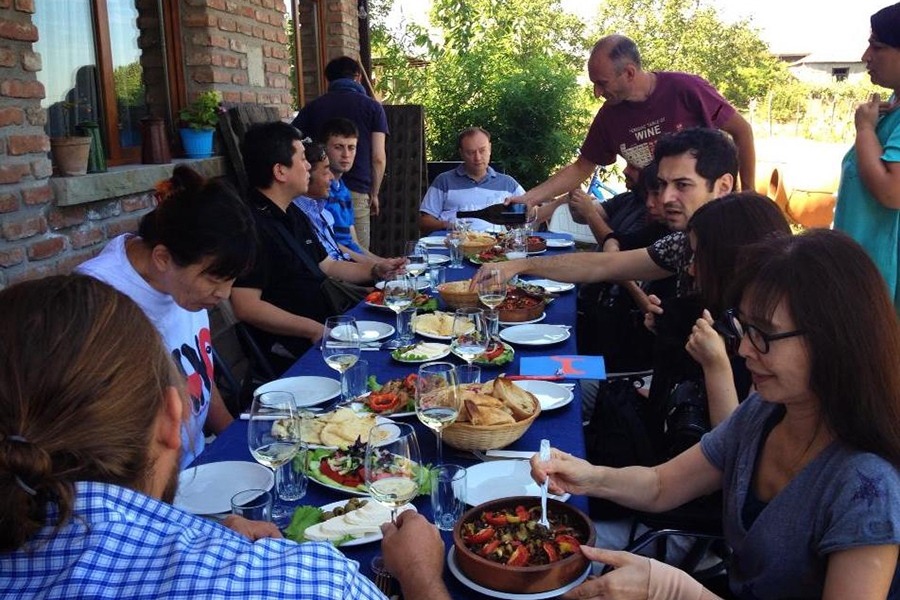 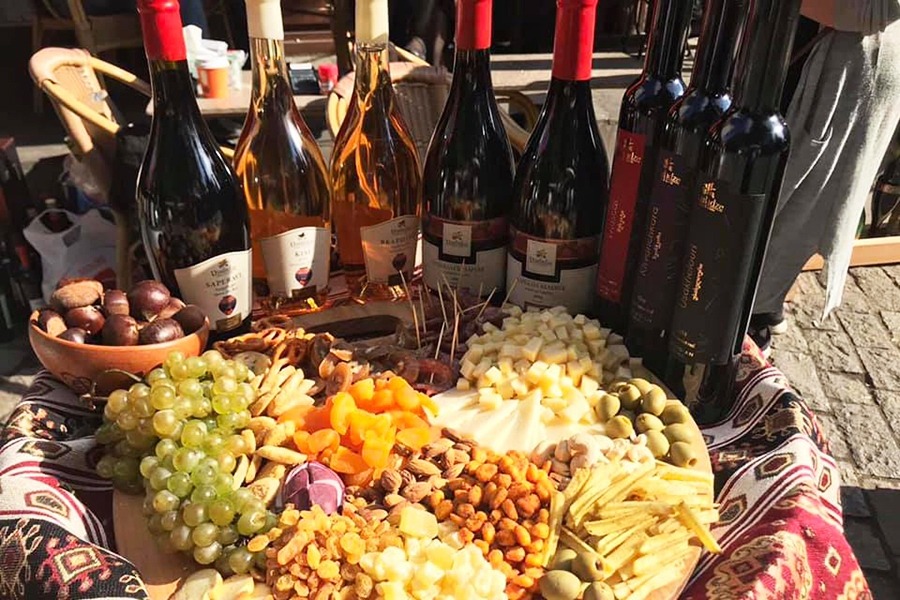 Fresh herbs. Purple basil, coriander, dill, fennel, mint, summer savory, tarragon, parsley, garlic, and chili are often eaten as a salad to cleanse the palate at the beginning of a meal. Purslane, wild garlic, and beet greens are typically used in cooking.

Oils. Georgian cuisine is known for its use of ground walnuts as a key ingredient. Traditional recipes also call for walnut oil, sunflower oil, and corn oil.

Pickles. Every Georgian table—and every marketplace—makes room for delicious pickled garlic heads, green tomatoes, cucumbers, eggplant, and jonjoli, a dish made with pickled sprouts from a local shrub.

Breads and pastries. Traditional Georgian breads vary in shape are made from a variety of grains, but most—including tonis puri and shotis puri—are baked flat in large, rounded ovens. Mchadi (cornbread), chvishtari (cheesy cornbread) and ghomi (a porridge similar to polenta) are traditional breads made with corn. Lobiani is a bread filled with kidney beans, fried onions, and spices.

Cheeses. Georgians enjoy a wide range of cheeses, the most common of which are Sulguni and Imeruli, moderately salty cow’s milk cheeses with an elastic texture. Sheep’s milk cheeses are also common, including the pungent Guda, as well as smoked cheeses from the mountain regions. In addition to the popular khachapuri bread, Georgians make several traditional dishes with cheese, including nadughi, a thin disk of Sulguni cheese filled with cottage cheese and mint.

Though it’s as important in Georgian cuisine as in European, cheese plays a different role on the Georgian table. Rather than being served as a snack or dessert, Georgian cheese is frequently a part of hot dishes. And it can be boiled in milk, roasted on a spit, fried in oil, baked in pastry, or flavored with oil and spices to add dimension to first and second courses.

Soups and stews. Most common in homes and rural restaurants, Georgia’s rustic soups can be as thick as stews or casseroles. They include chrianteli (cold fruit soup), chikhirtma (lemon chicken soup), kharcho (meat and vegetable soup), and matsoni soup (soup made with tart yogurt and herbs). Perhaps the most popular soup is khashi, a garlicky soup made with tripe, bread, and milk—best known as a hangover cure.

Meat. Meats factor heavily in Georgian cuisine, with lamb, beef, poultry, and pork prepared in a variety of stews, roasts, and grilled dishes.

Fish. Apart from areas near the Black Sea, Georgia’s fresh fish selection is limited to farmed trout, salmon, sturgeon, and small river fish. In restaurants, fish is prepared simply—gilled or roasted with lemon or a classic Georgian walnut sauce or pomegranate sauce.

Sweets. Georgian sweet dishes are a welcome way to end any meal. They include gozinaki (a crunchy honey-nut bar), churchkhela (candle-shaped walnut or hazelnut candy), kada (butter cookies), and pelamushi, also known as tatara (pudding made of grape juice and cornmeal).