“[Georgia] uses methods of winemaking that you couldn’t invent in a modern world; you could only inherit them through the mists of time.”
Oz Clarke
The History of Wine in 100 Bottles

Qvevri, the heart of an enduring tradition

Winemaking in Georgia stretches back over 8,000 years of history. According to archaeological evidence, the first Georgian wines were made and stored in earthenware vessels called qvevri (or kvevri). The qvevri is Georgia’s most important and best-known winemaking vessel, and it remains the centerpiece of traditional winemaking in Georgia. 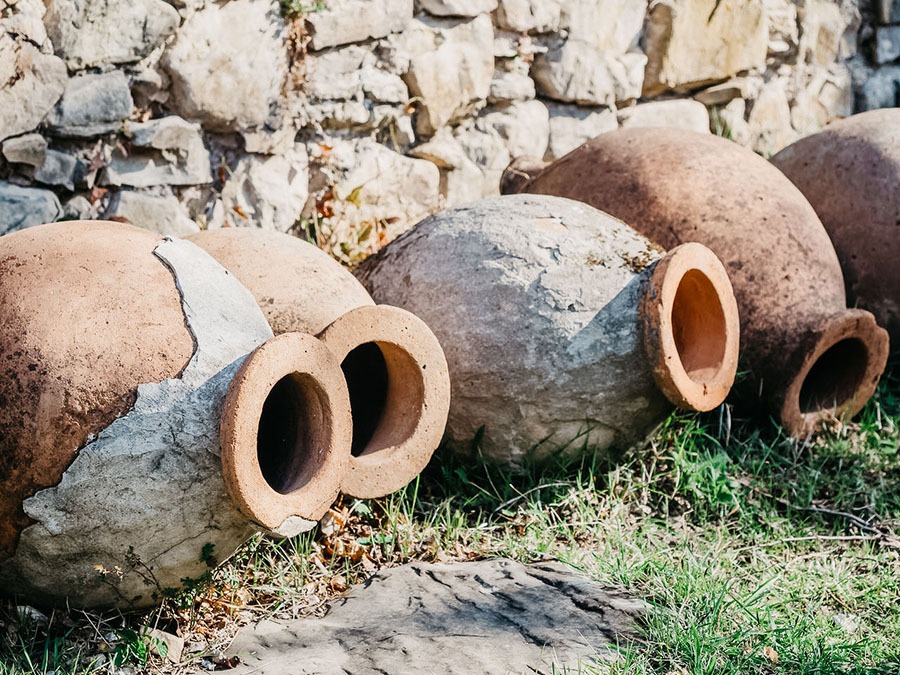 History of the qvevri

A qvevri (also called a churi in western Georgia) is a large, egg-shaped clay vessel with narrow bottom and a wide mouth at the top. Though researchers believe the earliest qvevri were stored above ground, Georgian winemakers for millennia have buried their qvevri, with only the vessel’s rim visible above the ground. Scholars say the word qvevri comes from kveuri, which means “that which is buried” or “something dug deep in the ground.”

Qvevri are uniquely Georgian vessels, different in shape and function from the clay amphorae used elsewhere. Used for wine fermentation, maturation, and storage, qvevri are among the world’s earliest examples of winemaking technology.

Archeologists date the oldest known winemaking qvevri—discovered in a Neolithic settlement in eastern Georgia in 2015—to 6000 BCE. These vessels are not only important historical artifacts but early evidence of an enduring cultural tradition.

Modern qvevri typically range in size from 100 liters to 3,500 liters. According to Lisa Granik’s The Wines of Georgia, 1,000 to 1,200 liters seems to be “the sweet spot for fermentation.” The largest qvevri are big enough for a person to climb into—which is what the winemaker does when it’s time to clean a vessel.

The tradition of making wine in qvevri is so embedded in Georgian culture that in 2013 UNESCO added it to its catalog of humanity’s intangible cultural heritage. This marked the qvevri a symbol of the deep cultural roots of Georgian wine and the authenticity of Georgian winemaking.

In 2021 qvevri were granted Protected Geographical Indication (PGI) status. Qvevri is the first non-food item to be added to the State Register of Appellations of Origin and Geographical Indications of Goods. This PGI status legally establishes Georgia as the place of origin of qvevri, as well as codifies their shape, capacity, raw material and production method.

The Georgian State Register of Protected Geographical Indication (PGI) aligns with the EU classification system. Similar to the French system, the PGI designation is akin to a VDP (Vin de Pays) classification. Now under the PGI regulation, only raw materials obtained in Georgia are allowed to be used for the production of qvevri. 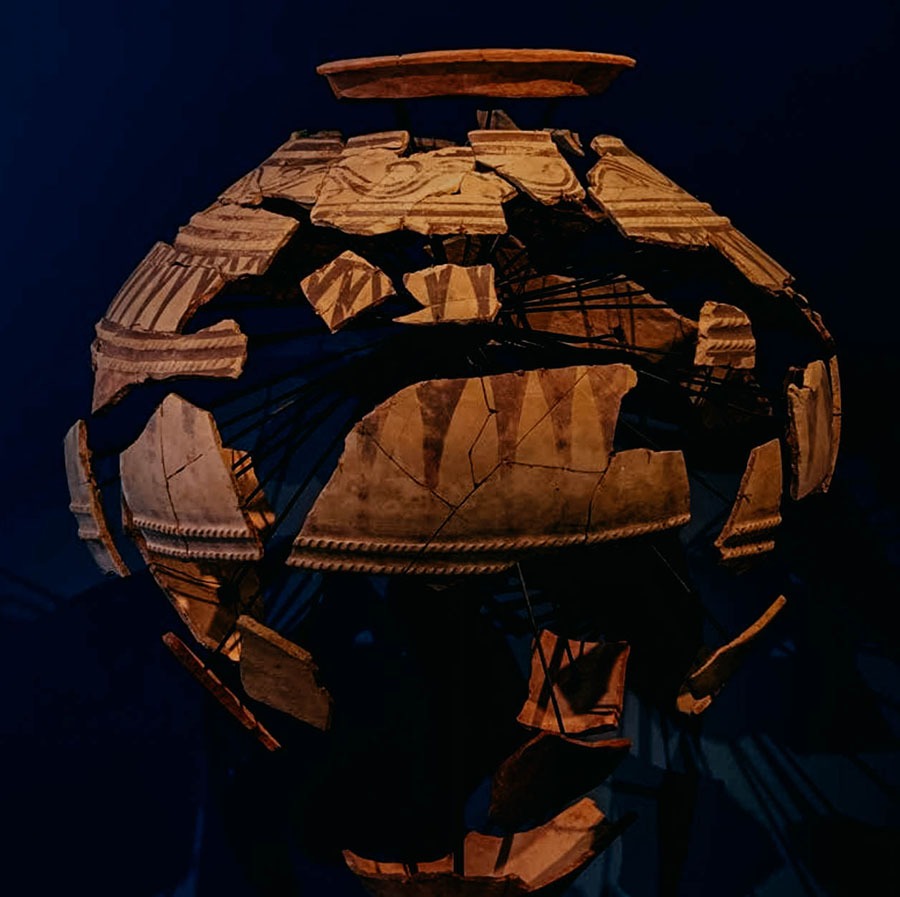 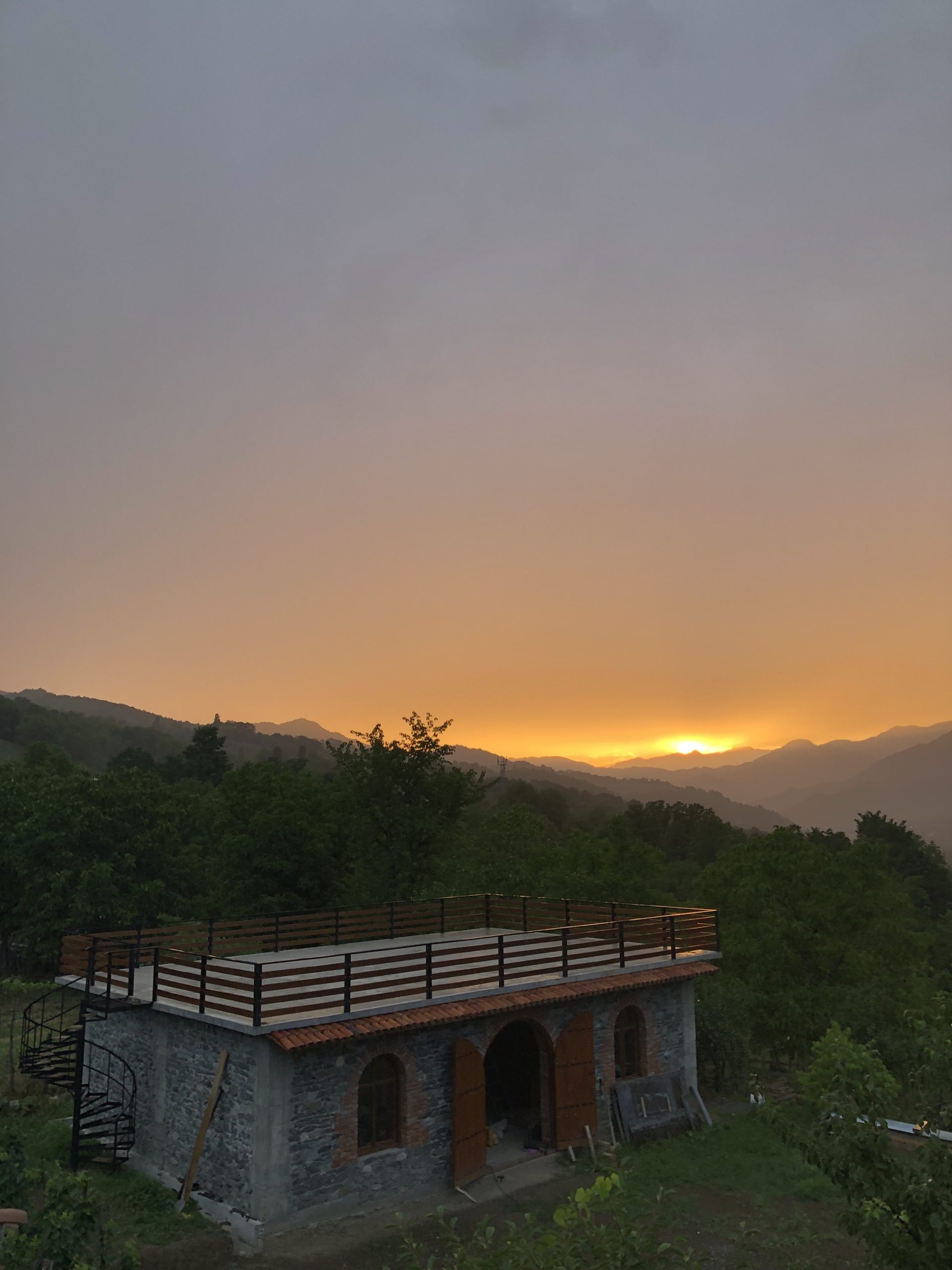 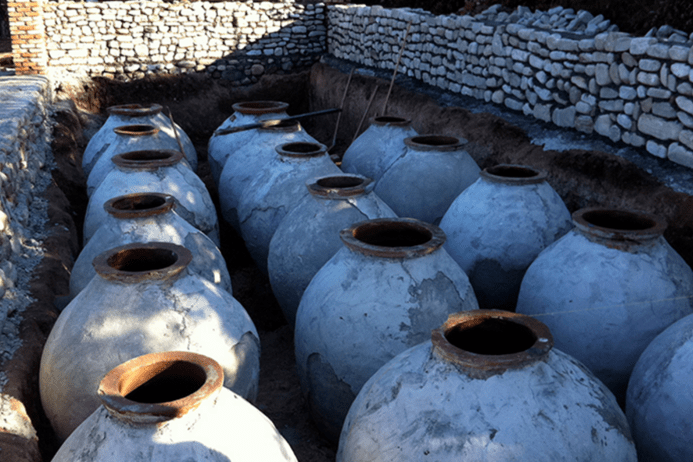 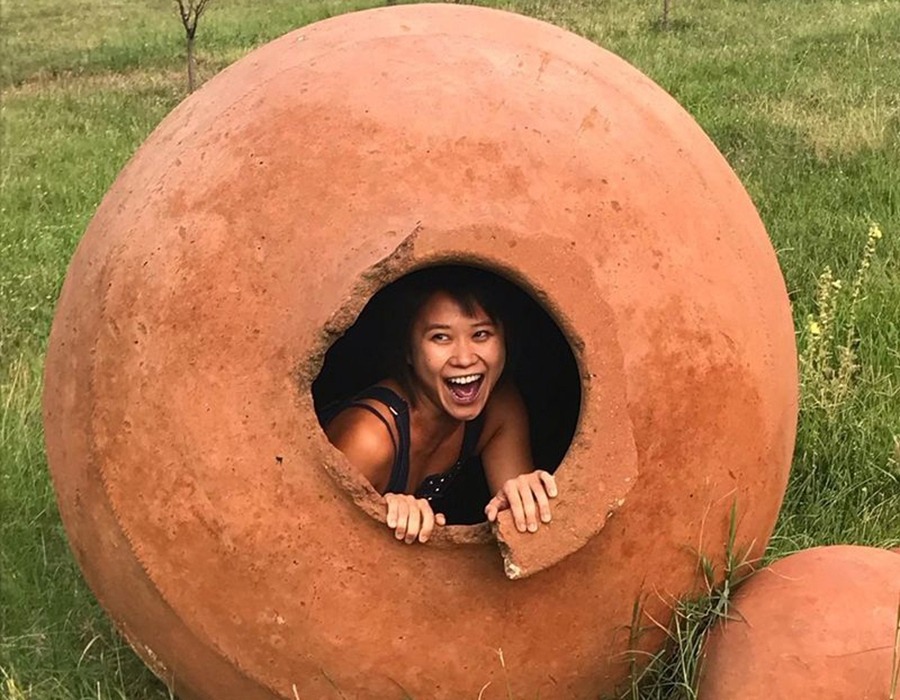 For thousands of years, the production of qvevri—like the making of wine—was a skill passed down from generation to generation across Georgia. Many of the qvevri found in Georgia today have been in use for decades, if not centuries.

Today qvevri-making is the domain of a few family-owned companies in the wine regions of Kakheti, Imereti, and Guria. Vessels from each region have their own variation on the standard egg shape.

Demand for new qvevri remains in high both within and outside Georgia. The traditional vessels are particularly popular among organic and biodynamic producers who want to make wine with little or no intervention.

Modern technology hasn’t changed the fundamentals of qvevri production. Today’s vessels are still painstakingly crafted by hand from local clay. Though it can take six weeks to build a 1,000-liter qvevri, a master craftsman typically builds several qvevri at once.

These are the main steps in the qvevri-making process:

• Mine the clay from a local quarry
• Clean the clay with clear running water and add river sand
• Grind the clay to give it a smooth consistency
• Form the clay into logs
• Begin building the qvevri on a wooden platform, working from the bottom up
• Add clay logs one layer at a time, shaping and smoothing at each stage
• Let the clay dry for two days between each layer
• Let the finished qvevri sit for three to four weeks before firing
• Fire the qvevri in a wood- or gas-fired kiln, allowing it to bake for up to seven days (at approximately 1,000°C to 1,300°C)
• Allow the kiln to cool for three days before opening it and removing the qvevri

After a new qvevri is removed from the kiln, the maker carefully cleans the interior; some qvevri makers use beeswax to seal the inside walls. In addition, some winemakers order their qvevri with a coating of lime or cement on the outside.

Placing the qvevri in the marani

At farms, estates, and wineries across Georgia, the marani is the place where the winemaking happens. The Georgian marani, or wine cellar, can take several forms—a standalone building, a shed, the main floor of a two-story home, a cave carved into a cliff, an add-on to a home or church, or an open-air facility. Inside the marani, the winemaker presses the grapes, produces the wine (whether in qvevri, oak barrels, or stainless steel tanks), and stores the finished product.

Inside the marani, winemakers “plant” their qvevri in the ground, with the rim of the vessel standing above ground level. Around the rim of the qvevri, the floor of the marani is typically tiled or made of a thick layer of gravel. Most winemakers today have qvevri in various sizes so they can experiment with different grapes and fermentation timeframes. 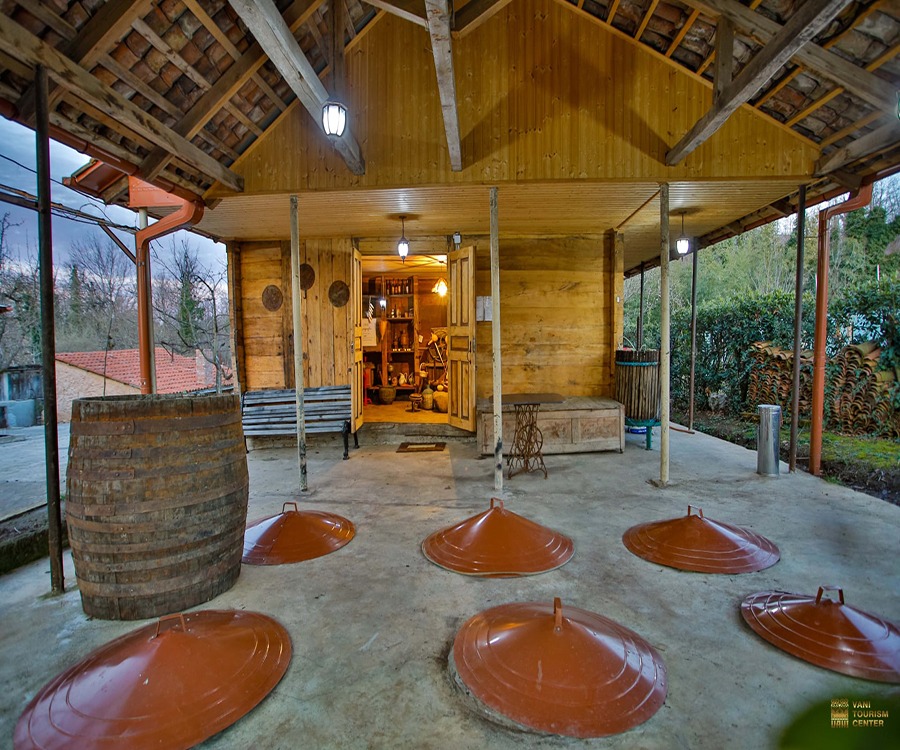 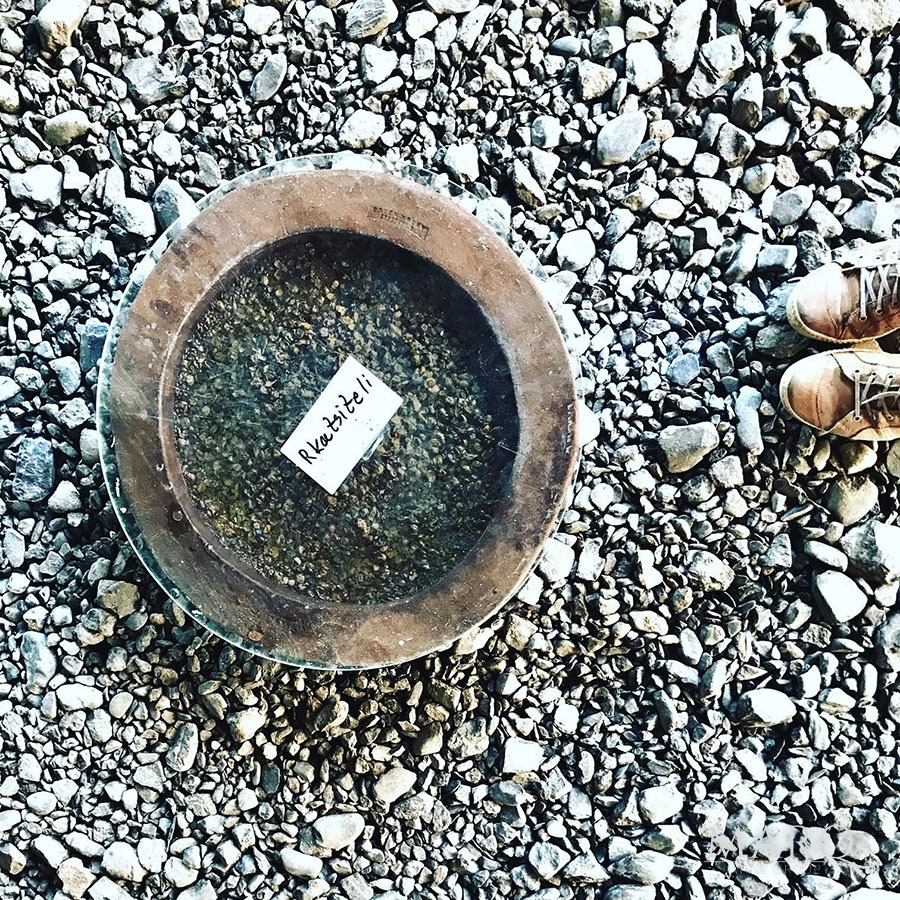 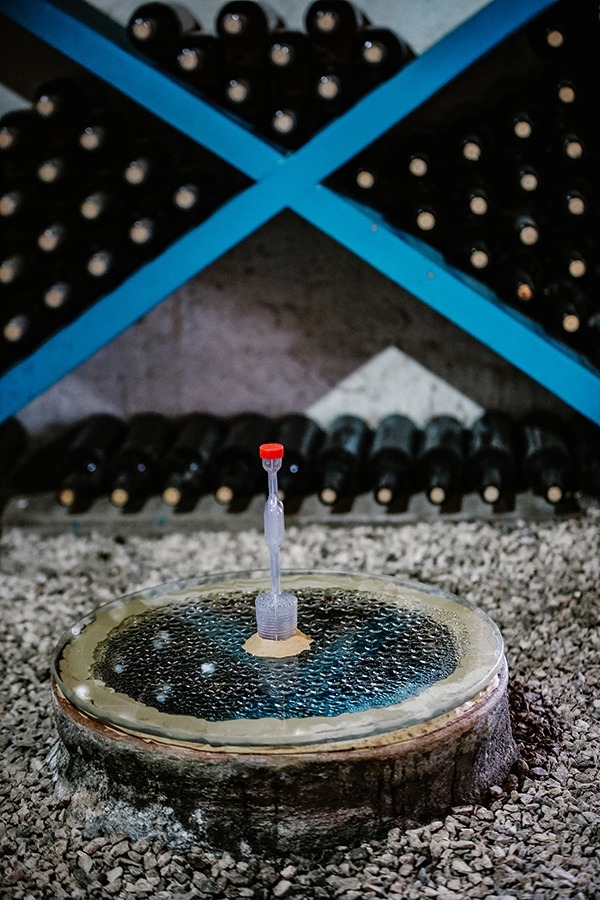 1. Cleaning. The process starts with a clean, well-rinsed qvevri. Traditionally, a worker scoops out the solids at the bottom of an emptied vessel, then climbs inside to scrub the walls (see the cleaning tools described below). Then the qvevri is washed out with an alkaline solution and rinsed several times until the water runs clear.

2. Crushing. After sorting the grapes, the winemaker crushes the bunches in a traditional stone or wooden wine press, called a satsnakheli. The grape must is then loaded into the qvevri, typically with all or part of the marc and stalks, to three-quarters of the vessel’s capacity. The grapes can be either red or white, but the best-known traditional Georgian wines are the amber wines produced in qvevri from white grapes. (Red grapes are typically destemmed at this stage.)

4. Sealing the qvevri. When the cap starts to sink and producers determine fermentation is complete, they seal the qvevri with a lid (stone, glass, or metal) and a clay or silicone sealer.

5. Maturation. Producers leave the solids to macerate in the qvevri for the first three to six months of the wine’s aging before removing them. (This period is shorter with red wines and some white wines.) Producers who want malolactic conversion to take place during fermentation (especially with red wines) sometimes warm the qvevri with a heating element before racking the wine off the lees. The qvevri’s sloped walls allow the yeast and sediment to settle at the bottom while the wine circulates above.

6. Storage. In the spring, when the wine is ready, the winemaker either bottles it or transfers it to another qvevri for short-term storage—since Georgian wine is often consumed before the next harvest—or an extra year of aging.

Although contemporary Georgian producers still follow—and prize—their traditional winemaking practices, they are also asking new questions and trying new things. People are experimenting with the winemaking process, writes Granik: “Today, many producers are informed by tradition but not trapped by it.”

Producers are also experimenting with wines not traditionally associated with Georgia: 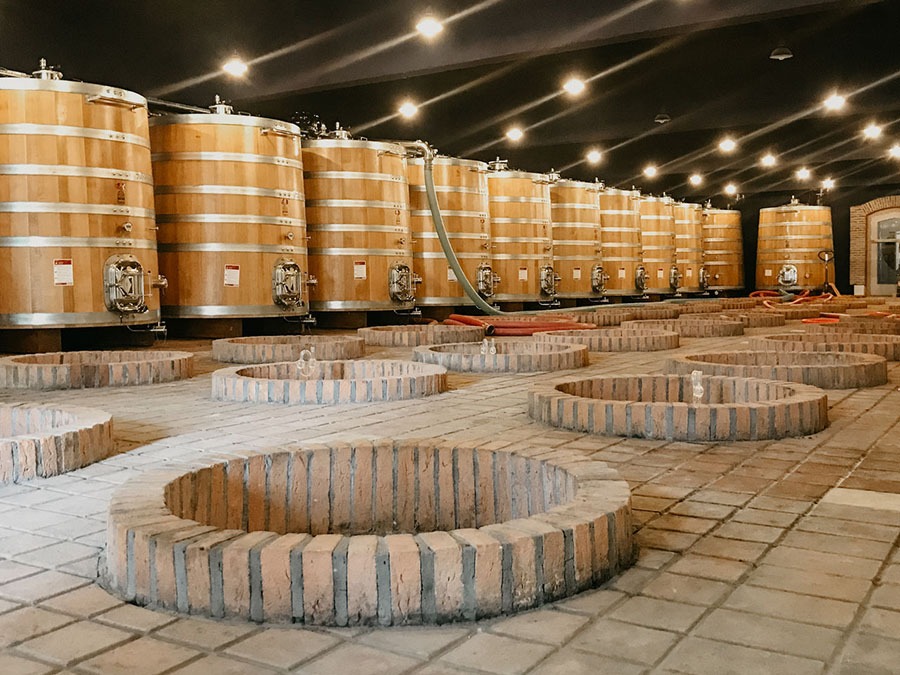 Inside the marani, visitors may see a variety of tools and utensils, including the following:

Avgardani — A copper cup or bucket attached to a long wooden handle, used to remove sediment, debris, or dregs from a qvevri.

Chapi — A copper pitcher used to withdraw wine from a qvevri. These vessels come in various shapes and sizes, but they always have a handle.

Khapiri — A copper pot attached to two long poles. Used to remove debris, sediment, and dregs from the qvevri. Sometimes known as an orkheli.

Khelkotana — A copper pitcher used to withdraw wine from a qvevri and pour it over into a serving pitcher. A smaller version made of clay is also called a chapruka.

Kochobi — Stout half-liter or one-liter pitchers used to remove wine from the qvevri, primarily when racking from smaller to larger vessels.

Orgo — A qvevri lid. Traditionally made of wood or stone, now commonly glass or metal.

Orshimo — A bulbous vessel with a wooden handle used to ladle wine out of a qvevri. Made from a gourd, clay, or copper. Sometimes known as a chapi, doqi, kope, or khrika. 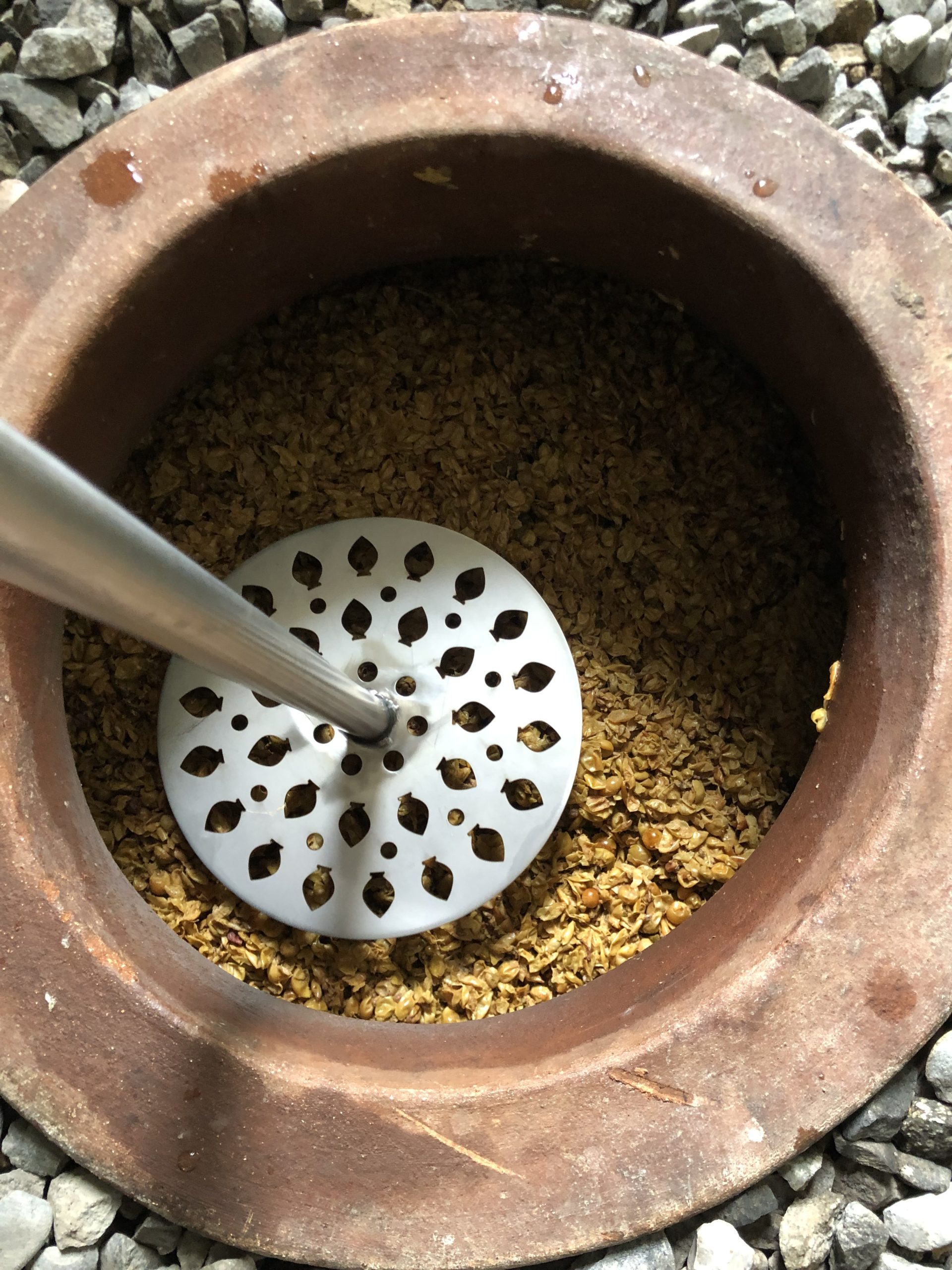 Krazana — A U-shaped scrubbing tool made from the roots of St. John’s Wort, which is believed to give it antiseptic properties. This tool is best suited for a large-capacity qvevri; the worker climbs inside the vessel to clean the walls, using the two ends of the tool to scrub in a wide arc.

Sartskhi — A scrubbing tool with a long handle that can reach deep inside the qvevri. The head of the tool is a block made from layers of pressed cherry tree bark.

Tagvisara — A brush-like tool made from the stiff twigs of the butcher’s-broom plant, an evergreen that grows throughout Georgia. The tagvisara can come with or without a wooden pole attached. Workers use the handheld version when they climb inside a large qvevri.

Gviis Tsotskhi — A brush-like tool made from the branches of juniper bushes. Like the krazana, this tool is used inside a large-capacity qvevri, which a worker climbs inside to clean.

Orchkhushi — A scrubbing tool made from a bundle of corn husks bound together and lashed to a wooden pole like a stiff mop.

Matsatsuri — An absorbent cloth attached to a wooden pole that soaks up any water remaining at the bottom of a qvevri after it has been thoroughly rinsed and emptied.

Ochiora — A long wooden board with a hole in its center used in conjunction with a long-handled sartskhi or orchkhushi tool. After placing the cleaning tool in the qvevri, a worker lays the ochiora across the opening of a buried qvevri, fitting the tool’s handle through the board’s center hole. Two additional holes on opposite ends of the board let workers stake it into the ground to hold it secure. The board protects the rim of the qvevri from being damaged by the handles of cleaning tools.

For more information, see The Wines of Georgia (2019) by Lisa Granik, MW.