As the birthplace of winemaking, the country of Georgia is home to more than 500 varieties of indigenous grapes—roughly one-sixth of the world’s total grape varieties. Georgia’s vineyards include endangered vines found nowhere else on earth. Today, some vineyards feature living vine libraries, where visitors can sample rare grapes.

The Georgian government sponsors a centralized vine library, called the National Grape Collection, at the LEPL Scientific-Research Center of Agriculture in Jighaura, north of Tbilisi. Vineyards and nurseries here contain 437 varieties of native Georgian grapevines, along with 350 non-Georgian varieties. Researchers study the indigenous varieties to better understand their origins, grape characteristics, disease resistance, and more. The goal is not only to rediscover and identify lost Georgian grapes, but also to discern the best candidates for producing quality wines.

Georgia has nearly 50,000 hectares of grapes, with 75% planted in white grapes and 25% in red. By far the largest portion of the nation’s vineyards are planted in the Kakheti region of eastern Georgia, the country’s primary winemaking area. Although Kakheti boasts roughly 80 grape varieties, the two most prominent are Rkatsiteli (white) and Saperavi (red). 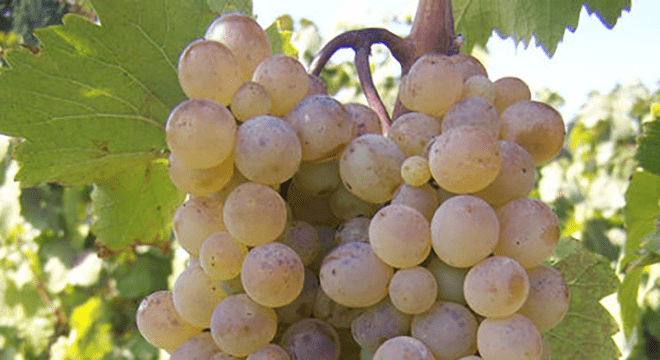 Though it is now grown throughout Georgia as well as abroad, the Rkatsiteli white grape variety is believed to have first emerged in eastern Georgia in the first century. Rkatsiteli makes noticeably acidic but balanced white wines with a full flavor profile and good body. Restrained and refreshing, with crisp green-apple flavors and hints of quince and white peach, Rkatsiteli wines are more complex when produced using the traditional Georgian qvevri method. Rkatsiteli grapes result in high-quality table wines, regional wines, and appellation-controlled wines. Rkatsiteli grapes are frequently mixed with the Mtsvane Kakhuri variety. 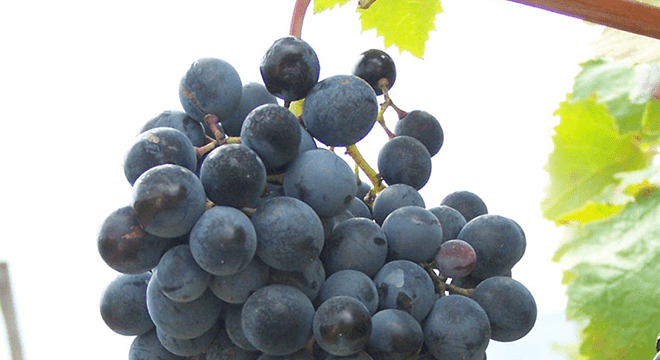 Deep in fruit character, yet brisk with acidity, this gutsy grape presents a unique alternative to everyday reds. The leading red variety in Georgia, Saperavi is indigenous to the country. Its name means “the place of color.” It is one of the few teinturier grape varieties in the world—a grape with red flesh as well as red skin. Saperavi wine reflects a deep, inky, and often fully opaque color. It has aromas and flavors of dark berries, licorice, grilled meat, tobacco, chocolate, and spices.

Of the more than 525 grape varieties cultivated in Georgia, approximately 40 are currently in commercial production, including the following. 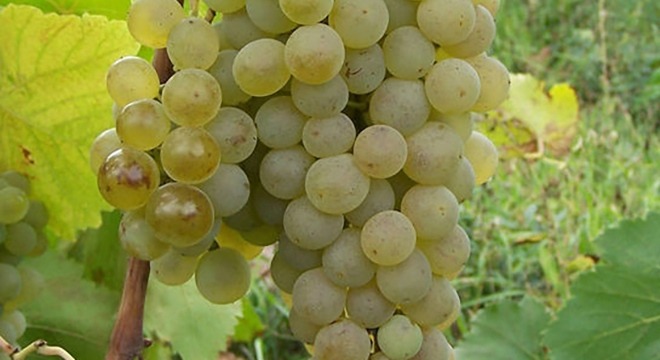 Named for the color of olive tree leaves, the Chinuri variety is abundant and ripens late in the season. Characterized by hints of wild mint and forest pear with notes of vegetation and fruit, Chinuri grapes are best suited to the production of sparkling wines. Particularly well known are the sparkling Atenuri wines, distinguished by their green or straw-colored hue and their softness on the palate. 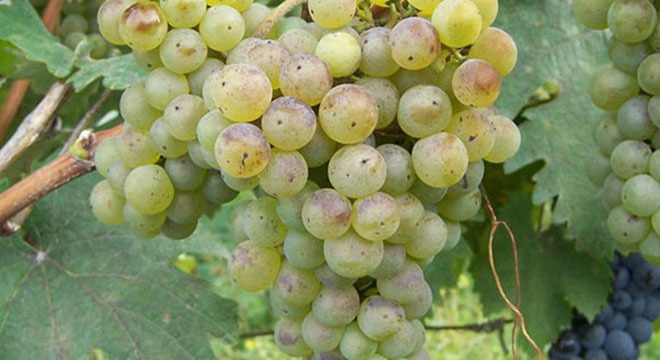 The Goruli Mtsvane variety ripens late in the season and produces spirited white wines characterized by aromas of lime, wildflowers, and spring honey. Goruli Mtsvane is frequently mixed with Chinuri grapes to yield a sparkling wine with distinctive flavor. Goruli Mtsvane/Chinuri blends are frequently left to ferment with Tavkveri grapes to produce Khidistauri red wine, which is known for its delicate flavor. 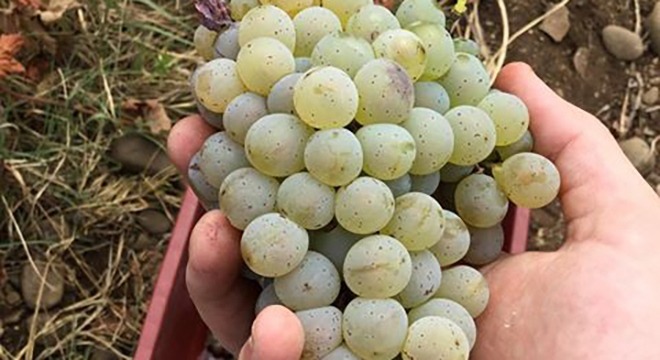 One of the most widespread white grape varieties in the Kakheti region in the early 19th century, Kakhuri Mtsvane became increasingly rare due to diseases such as powdery mildew and phylloxera. Early to ripen compared to other grape varieties, Kakhuri Mtsvane is light-bodied but full of character, with distinctive aromas. It yields amazing traditional, qvevri-made wines that are also well suited for coupage. 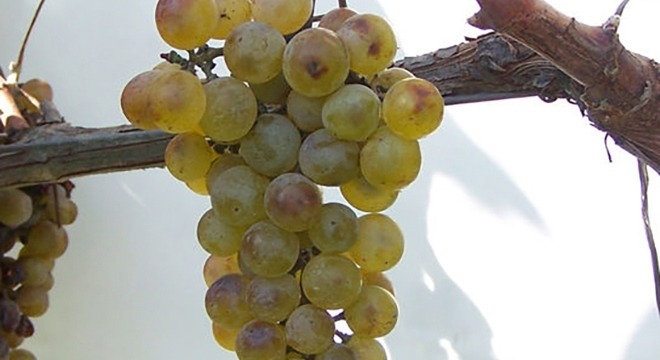 This white grape variety ripens between early September and the second half of the month. While the Khikhvi vine produces a relatively small number of grapes, its wines have great potential to accumulate sugar. The Khikhvi grape produces distinguished classical European-style wines with the aroma of exotic plants such as box tree. The grapes also yield high-quality traditional, qvevri-made wines with notes of ripe fruit or dried yellow fruit. In the past several decades, superb dessert wines have also been made from Khikhvi grapes. 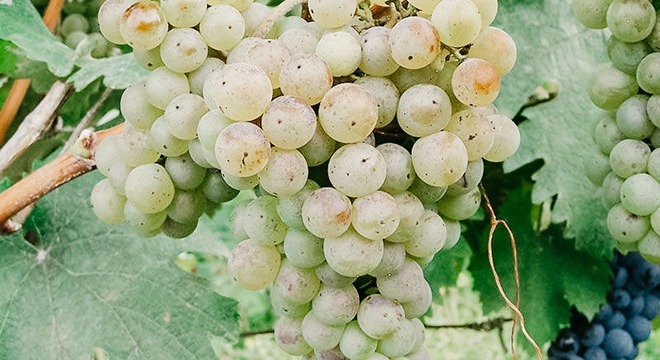 Some scientists believe the Kisi white grape is a hybrid of the Mtsvane and Rkatsiteli varieties. Kisi vines produce a relatively small number of grapes, which ripen mid-season. While both classical European and traditional Georgian wines produced from Kisi grapes have unforgettable aromas and flavors, the wines made in qvevri are characterized by aromas of ripe pear, marigold, tobacco, and walnut. 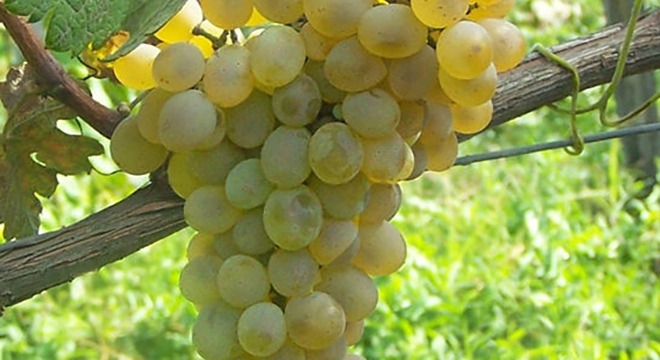 Krakhuna is a late-blooming grape variety that produces full-bodied, straw-colored white wines with apricot, banana, and honey aromas—and a high alcoholic content. Krakhuna wine is an exceptional candidate for aging. It becomes deeper and more complex after just a few years. 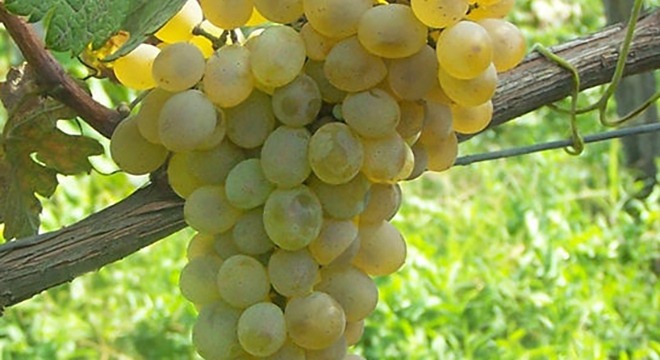 One of Georgia’s oldest varieties of wine grapes, this white grape peaks during the second half of September. High-quality table wines, regional wines, and appellation-controlled wines are produced from the Mtsvane Kakhuri grape, which is characterized by hints of vineyard peach, fruit tree blossoms, and mineral overtones. 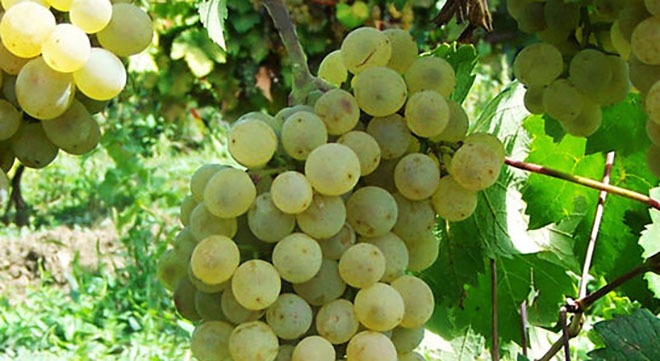 Once found throughout the Guria region of western Georgia, the Sakmiela variety now survives in only a few locations. Sakmiela grapes yield impressive, juicy wines with a pleasant greenish straw-colored tint and exotic aromas. 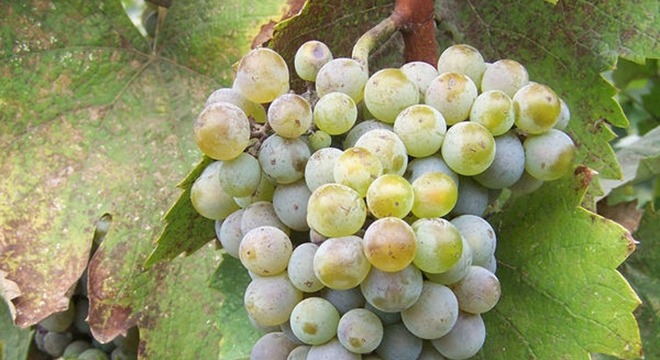 Believed to be among the oldest white grape varieties in western Georgia, Tsitska ripens late and yields light, straw-colored wines with greenish tones. Tsitska grapes are considered superior for producing sparkling wines. Characterized by aromas of vegetation and hints of pear, lemon, honey, and melon, Tsitska wines tend to be quite acidic and lively. 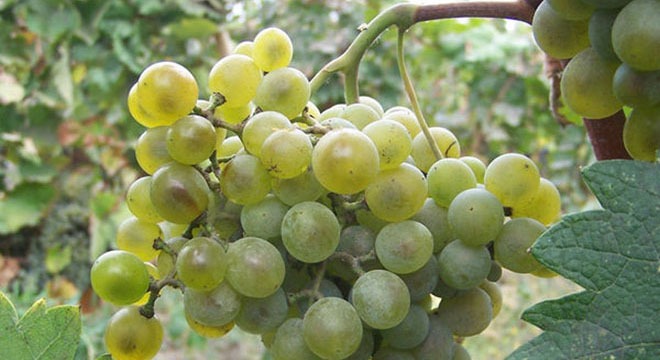 A defining variety of white grape since the 19th century, Tsolikouri ripens late and yields full-bodied, light straw-colored wines with citrus, yellow fruit, white plum, and floral aromas. Wines made from Tsolikouri grapes are well suited for aging, and the variety is also used to produce sparkling wine. 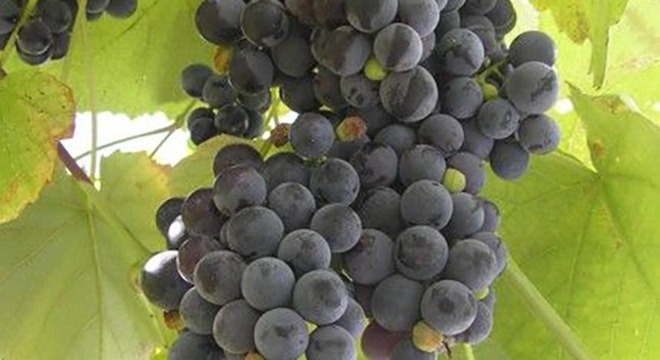 The Aleksandrouli variety originates and continues to thrive on the sunny southern, calcareous slopes of the Caucasus Mountains in the Racha region of western Georgia. The grape requires a longer growing season as it ripens later than average. Wines produced from Aleksandrouli grapes are can be dry to semisweet and are typically low in tannins and amazingly soft, with aromas of raspberry and black cherry. 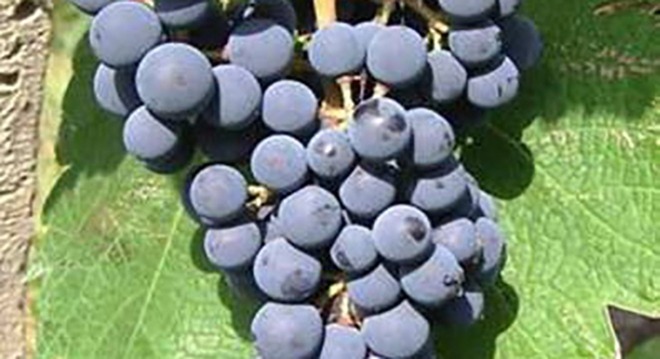 This variety, used mainly for rosé wines, is mostly found in the Guria and Adjara regions of western Georgia. During the early period of Georgian viticulture, Chkhaveri vines were trained to grow up trees—a process known as maghlari. Late ripening and low yielding, Chkhaveri grapes are typically harvested in the second half of November. Chkhaveri grapes produce soft, harmonious wines with aromas of white fruits and moderate to high degrees of alcohol. 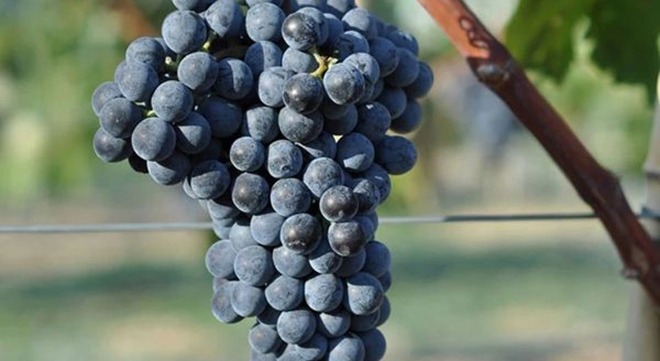 Believed to be one of Georgia’s most ancient varieties, Dzelshavi grows mainly in the regions of Racha and Imereti. Wines made from this thin-skinned grape can range from soft and elegant to lively and precise. Often used as a supporting grape in a blend, Dzelshavi is equally suited for rosé and light-bodied red wines. 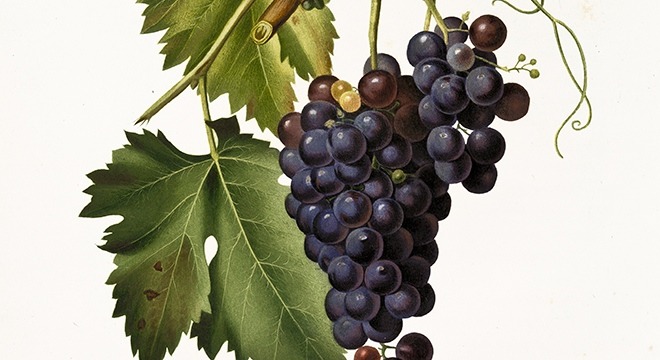 Indigenous to the Kakheti region, the Jghia grape is relatively light in color and tannins. Its fruit is small and dark, with good resistance to fungal diseases. Wines made from Jghia are lighter in color than other Georgian reds. They are typically fermented in qvevri and have cherry and berry flavors with a hint of black pepper. 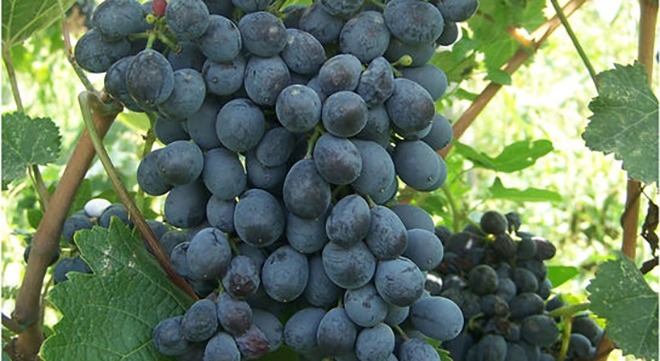 This red grape from the Racha region ripens later than average and has an exceptional capacity to accumulate sugars. Frequently blended with Aleksandrouli, Mujuretuli grapes can be made into classical dry red wines as well as naturally semisweet wines—a style known as khvanchkara. 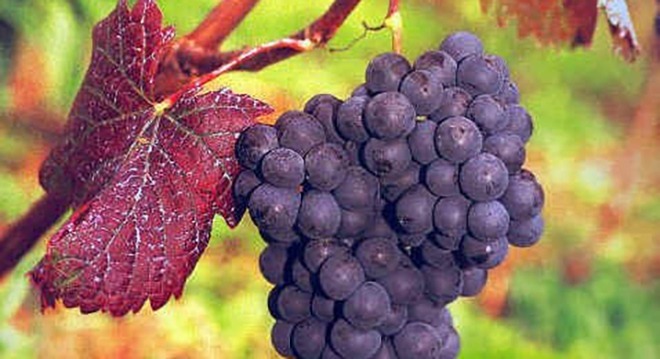 This red grape variety traditionally grows as a maghlari vine—a vine trained to grow up trees. Widespread throughout the Mingrelia region of western Georgia, this variety has its best examples in the Martvili and Senaki districts. Ojaleshi requires a long growing season. With budbreak in mid-April, it is generally not harvested until mid- to late-November. This thick-skinned variety can be vinified into semisweet and dry red wines with incredible depth of character and notes of spice and pepper. 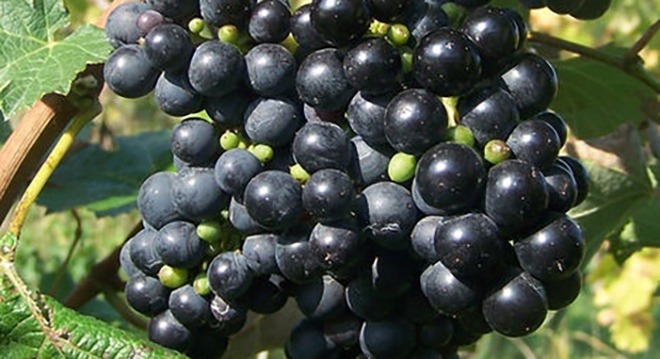 Grape genealogy suggests this red grape is a transitional variety between a cultivated and a wild vine. Grown throughout the Imereti region of western Georgia, Otskhanuri Sapere ripens in mid to late October. Like Saperavi, this is a teinturier grape, producing wines with a deep, opaque ruby color. In their youth, the wines are grippy and structured with high tannins and acidity. Exhibiting flavors of forest fruits, red berries, and herbs, these wines have great aging potential. Otskhanuri Sapere is considered Imereti’s best red grape variety, with great potential as winemakers develop a deeper understanding of the grape’s nuances. 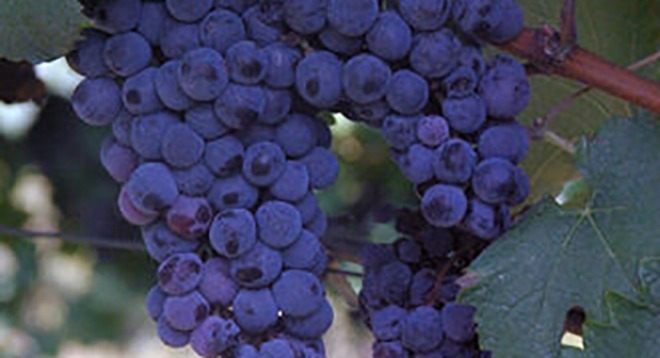 Shavkapito is one of the native varieties of the Kartli region of eastern Georgia. Shavkapito has a shorter growing season. Whether vinified in the traditional qvevri method or the European style, wines from this grape clearly reflect the terroir. When grown at lower altitudes and in flatter vineyards, Shavkapito produces more full-bodied and intense wines; when cultivated on mountainous slopes, the grapes produce wines with high acidity, bright fruit, and delicate aromas. With notes of cherry and herbs, Shavkapito can produce red, rosé, and sparkling wines. 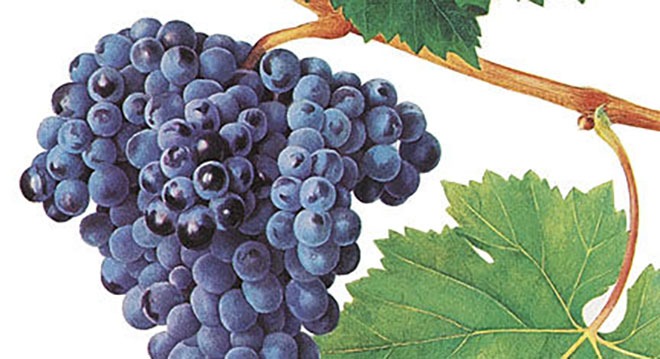 A red grape from the Kartli region of eastern Georgia, Tavkveri grows well in both clay and sandy soils. This grape is high yielding and tends to ripen in mid-September. Extremely versatile, Tavkveri can be made into sparkling, rosé, red, and even sweet wines. The red wines, whether made with modern or traditional vinification methods, are medium bodied with notes of cherry, earth, and herbs. 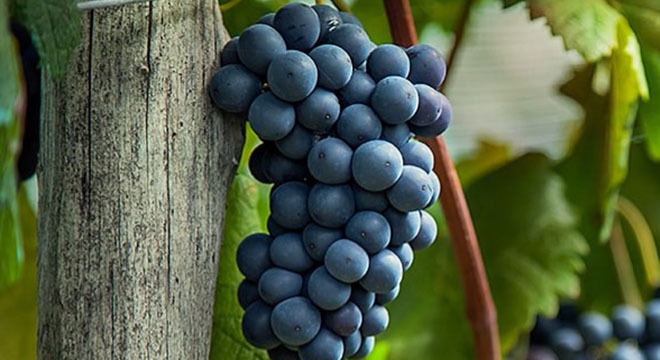 This Georgian red grape variety is common in the Tsageri district of the Lechkhumi region of western Georgia. It grows best on loamy, calcareous slopes. A late-season variety with thin skins, Usakehlouri tends to develop high sugars while maintaining a high degree of natural acidity—whether its wines are produced using traditional or modern methods. Wines resulting from European methods are lightly colored with bright acidity and with high-toned notes of violets, mint, and pepper.