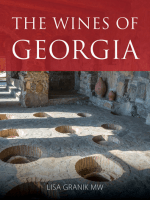 Wines of Georgia Blog May 2020

“Brown meadow.” I’ve heard this term again and again when asking Georgian winemakers about their soil.

Learning that this is an official designation under the former Soviet Union’s soil classification system—a different scheme from what’s used in the West—was one of many aha moments I had when reading Lisa Granik’s 2019 book, The Wines of Georgia.

Though many of Georgia’s winemakers now understand and explain their soils using a European classification system, it is so helpful to understand that Georgian soil terminology developed under a Russian framework in the 20th century. So, there are terms that will require a bit more probing. The ongoing scientific project of correlating Georgian soils to the World Reference Base for Soil Resources is not yet complete, Granik notes. Which is one of the reasons this book is such a great resource.

Opening her discussion of soils, Granik quotes V.V. Dokuchaev, the father of soil science, who called Georgia an “open-air museum of soils.” She explains that Georgian soils are first classified according to their genesis and then according to bioclimatic areas. For example, high mountain soils are different from valley soils in a subtropical zone. The words many Georgian growers use to describe their soil types aren’t based on scientific terminology. Instead, Granik writes, they’re “often based on folk terms (chernozem = black earth; podzol = with ash underneath).”

In the book, Granik adds her own notes on soils to give us a comprehensive understanding of the geography and geology of each of Georgia’s wine regions.

Of course, to understand the region, you must start with the history. And it’s a long one—8,000 years. Granik moves the narrative along at a brisk pace. In her words, it’s “a romp through 8,000 years” in 22 pages.

She then moves through the Georgian wine culture, starting with the elements of the supra, or feast—a favorite subject! Next, she discusses viticulture, which includes vineyard layout, rootstocks, training, soil amendments, and the famed qvevri.

Granik leads us through all the basics of the qvevri itself—history, materials, production, waxing, placement, sealing, cleaning, challenges, and modern changes. Then she addresses the most common questions that come up in most conversations about qvevri:

Of the roughly 3,000 grapevine varieties in the world, around 525 can be counted as indigenous to Georgia. This number will likely rise, as more vines are continually being discovered in the country’s forests and mountains. The “vine library” outside Tbilisi now houses 437 of these, with others still under study. Granik provides a remarkable brief on a whopping 92 varieties, covering vine, leaf, and berry descriptions, as well as the style and profile of the resulting wines.

Since one of the most exciting things about Georgia is the seemingly never-ending stream of new varieties that winemakers are planting and experimenting with, this book will be an indispensable guide for navigating the new Georgian landscape of indigenous grapes.

The largest chunk of the book outlines in great detail the country’s 10 wine regions, explaining the geography, geology, and associated PDOs. Granik introduces the reader to a cross section of producers, along with her straightforward assessment of their wines. Along the way, she also introduces various historical sites.

Kudos to Granik for this detailed work. It is the most comprehensive reference we have today on this vibrant ancient—and emerging—wine region.

Available for order on Amazon here.