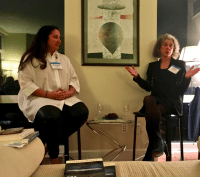 In Georgia, Life Is A Moveable Feast. Leave It To The Jews To Eat It Up.

“On a trip to Georgia, while retracing the footsteps of a modernist Russian poet for a dissertation, Goldstein realized Georgian food had to be written about. “People were smiling, there were lemons, there were watermelons, there were sun, and I realized I had to write about it,” said Darra. Georgian cuisine had yet to be officially codified, with the exception of Georgian princess and feminist Barbare Jorjadze’s 1874 offering…”