The first Georgian wine brand was created thanks to tireless efforts and tremendous desire of David Sarajishvili. He was the one to establish the first classical brandy making technology in Georgia and to produce the cognac. Sarajishvili has not only introduced the European winemaking technologies in Georgia but also conducted a study of the Georgian climate and soil for choosing right Georgian grape species and creating the best micro-zones for making vineyards. Established in 1884, the company produced its first product in 1887.

David Sarajishvili’s work was highly praised internationally in 1889-1912. As a result, Georgian brandy was awarded gold medals at Paris, Brussels, and Chicago exhibitions. In 1913 the company earned the exceptional status: “the provider of Russian Emperors house”.

Due to the incurable illness, David Sarajishvili passed away in 1911. The great producer and philanthropist invested most of his 3-million property in his country. He has financially supported the establishment of “The Reading and Writing Society,” the Kutaisi theater, surgery clinics, schools, academic institutions, and many others.

The company was headed by David Sarajishvili’s wife, Ekaterine Poraqishvili from 1911. She successfully continued her husband’s activity and also added her contribution to the development of cognac production in Georgia.

The Sarajishvili Vineyards are in several locations across the Kakheti region, including the Mukuzani micro-region; the bottling factory is in the northern area of Tbilisi, Georgia's capital. 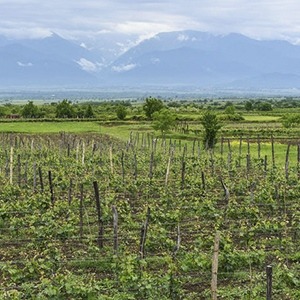