Sviri is a beautiful location and a distinctive microzone by itself, but there is more than that, why the location has been chosen. In the middle of the winery, there is an old oak tree, creating a special, almost mysterious atmosphere, attracting all visitors to the spot.

The secret lies in the beautiful legend from the times of Georgia’s great victories. According to a local story, king Solomon the Great of Imereti was returning to the capital city Kutaisi after he and his army defeated Ottoman Empire troops in the battle in the XVIII century. On the way back the king decided to rest in a Sviri village, noticing a huge oak tree with long, but massive branches and wide leaves dancing with the wind. He sat under the tree and appreciated the beautiful sight of his kingdom. The king was thirsty, so he asked for water, but instead, local people offered him tangibly refreshing Krakhuna – a white wine with which Sviri was known for.

King Solomon was enchanted by its fruity aromas and flavors. Now, with the taste of Krakhuna wine, he would fully experience the great pleasure and triumph of winning. As the king tasted the wine, he immediately ordered that only that wine be served for him.

The story served as an inspiration that ultimately made Doctor Giga Gotsadze abandon his major profession and come back to his ancestral home, selecting exactly this historical place with an ancient oak tree in the micro-zone of Sviri, where the best varieties of vine growing.

So with great efforts, he bought out the place and with his friend established Churi Chinebuli winery. The mission of the winery is to unleash the full potential of Imeretian wines and introduce them to the world.

They buy grapes and have 8 hectares of young vineyard 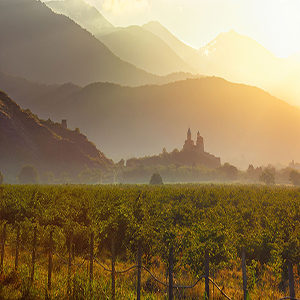